£3937 was awarded to Catharine Arakelian to introduce mindfulness to caregivers and people living with dementia in residential care homes, and for creating guidelines for teaching mindfulness to this population.

Catharine Arakelian of the Oxford Dementia Programme and Jonathan Barker, trained mindfulness teacher with Breathworks, appplied for Accessibility Funding to introduce Mindfulness to caregivers and people living with dementia in residential care homes and to create guidelines for teaching mindfulness to this population. They say, “There is a widespread belief that people living with dementia, cannot “learn”.  Many charities i.e. DEEP, Alzheimers Society, seeking to empower people with dementia, are working to change these attitudes and to put people with dementia at the centre of their care. Caregivers in dementia homes are emotionally engaged in their work but can neglect their own self-nurture, and report emotional overload, anxiety and stress“.

The original aim of the project was to deliver a large number of single Mindfulness Taster sessions to 160 caregivers and 64 people living with dementia in eight settings, to develop eight Mindfulness Champions in those homes, and to create guidelines for teaching mindfulness to this population. In meetings with the care home partner it became clear that they would prefer a single six week course in one care home. This took place over five days in successive weeks in December 2016, with separate sessions for staff and residents.

This change in the plan had the positive effect that Jonathan and Catharine could focus on and pilot the guidelines. In March and April 2017 Jonathan also taught three taster sessions to different groups of paid and family carers and people with dementia living in the community in Oxfordshire.

Comprehensive guidelines for have been produced to help teachers run mindfulness sessions with people living with dementia. These include focusing on sensual activities (due to cognitive impairment), repeating exercises in subsequent sessions, creating opportunities for group participation, and to run separate, cognitive-based mindfulness training for staff to act as enablers. Jonathan comments “I had recently taught mindfulness in a homeless hostel and found that when I ran a course for staff first, and then did a residents course, it was far more effective because staff encouraged residents”.

Catharine adds, “For some participants, being trained to use their bodily sensations to access their minds and influence their own well-being could bring positive outcomes. However, this would require any institution to support continued weekly classes, staff willing to enable daily practice and numerous staff trained to be able to manage the resulting more alert and demanding patients. Our experience suggests the potential value of a research project into the impact of intensive mindfulness training on rehabilitating the mind of someone living with dementia”.

Jonathan will attend the Centre for Mindfulness Research and Practice conference in July this year to describe the project and the guidelines in a session on Accessibility and Diversity in Mindfulness Teaching and Practice. Catharine and Jonathan also hope to be able to follow up their work with further groups and locations. 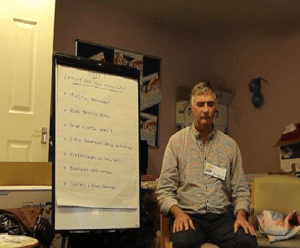