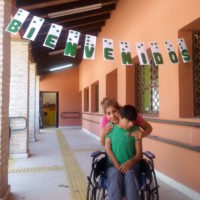 In line with our charitable aims we support training, activities or initiatives which widen access to, and participation in, mindfulness-based cognitive therapy and practices. Our Accessibility Fund grants are given on the expectation of clear impact, outcomes and/or key learnings. Applications to the Accessibility fund are reviewed by Oxford Mindfulness Foundation Board members, OMC staff and external advisers.

Here, we highlight a recent project supported by the accessibility fund.

The reduction of the symptoms of anxiety and depression in a group of mothers and carers who look after children with blindness, low vision and other disabilities.

Mothers and carers of children living with blindness, low vision and other disabilities who attend the public school “Luis Braille” located in Asuncion, Paraguay.

The group completed the course Mindfulness: Finding Peace in a Frantic World (MFPFW) based on the OMC MBCT programme. The sessions were delivered from April to June 2019 and were conducted by Jose Godoy, clinical psychologist and mindfulness practitioner from Mindfulness Paraguay.
Initial taster sessions were attended by a total of 22 people, of which 15 were mothers and 7 were carers (a grandmother, an aunt, two sisters, three babysitters). The final course was attended by a total of 10 mothers and 4 carers.
Quantitative screening pre and post course shows that there has been a decrease in the severity of symptoms of both anxiety and depression after the implementation of the mindfulness training. The general feedback received from the group of 7 mothers who finished the course was that the mindfulness training had a positive impact on themselves.