£4507 was awarded to Ariana Faris at the ‘Mindfulness without Borders’ project through our 2016 Accessibility Fund. The project provides mindfulness-based courses for stress reduction and trauma relief to Arabic- and Farsi-speaking populations of asylum seekers and refugees in the UK. Pilots are being run in Cardiff and London, both of which support large numbers of refugees. 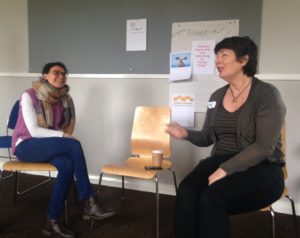 The project has already been successful in:

Going forward, the project aims to identify participants’ experiences of the practices and any relief of symptoms, as well as collect their views on practical aspects of the course such as the length of sessions, barriers to attendance, pitfalls and possibilities in using a translator, cross cultural issues etc. It will help refugees learn mindfulness skills to reduce their stress, build resilience and better coping mechanisms and improve understanding of how mindfulness can support integration of refugees into local communities. Resources will also be made available to other organisations and mindfulness teachers working with refugee communities in the UK and beyond.

Watch a video about the work of Mindfulness Without Borders.