First, I was a corporate lawyer, qualifying as a litigator at the City firm of Linklaters in the 1990s. Then I decided to change careers, became a newspaper journalist in the 2000s, and ended up as the media editor of the Daily Telegraph.

These high-pressure jobs ultimately caused me to burn out – and mindfulness became one of the essential tools in my recovery. I then completed my training to teach MBCT, at the OMC, in 2017.

For more information on Neil’s work with the OMF, please see here: https://www.oxfordmindfulness.org/people/neil-midgley/ 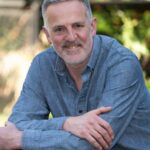