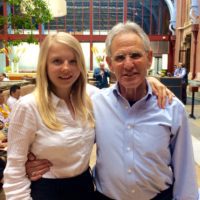 An Interview with Jon Kabat-Zinn (by Alice Tickell)

There are not many people practicing mindfulness who haven't heard of Jon Kabat-Zinn. He began his career at MIT, working towards a Ph.D. in molecular biology, where he also discovered meditation and Buddhist philosophy. This marked the beginning of a self-described “love affair” with mindfulness.

“Mindfulness is not a little stress reduction for your own betterment. It is using the opportunity of the human lifetime to contribute to beauty in the world.”

In 1979 Jon founded the Stress Reduction Clinic at the University of Massachusetts Medical School, where he developed an 8-week course that would later come to be known as Mindfulness-Based Stress Reduction (MBSR). Since then, MBSR has improved the lives of countless individuals suffering with stress, pain and chronic illness. Jon recounts: “I was a molecular biologist working with bacteria, then all of a sudden, a meditation teacher working with medical patients! How do you work that out?”

But Jon’s influence does not end there. His skilful and sensitive integration of ancient Eastern practice with Western thinking has found application in many other branches of society. I meet Jon in London, where he has spent the week with politicians, business leaders, scientists, economists and teachers – normally segregated into their respective fields, they have sat round the same table to explore mindfulness and its potential to transform our established ways of living.

As well as initiating dialogue, at times Jon has convinced London’s busiest to sit, do nothing: simply be. In a city dominated by striving and incessant doing, this feels radical, and I am left with a strong sense of the week’s significance, perhaps even historic importance. His visit has catalysed deep enquiry and the weaving together of different worlds. In his own words, “Mindfulness is the link. All these different human ways of knowing can be held by the human heart, which unifies discordant elements, and helps them to move as one in society”.

In keeping with his generous spirit Jon agreed to this interview, and at the end of this remarkable week there is much to reflect on. Before we begin, he warns: “I can’t give short answers. I don’t want to be like one of those cryptic Zen masters who nobody really understands. I want people to relate to what I’m saying”. And relate they do; there can be no better explanation for his worldwide following, many of whom have contributed questions.

Nevertheless, anyone who has heard Jon speak can affirm that his teachings are not only realised through words, but in the way that he embodies the qualities of mindfulness. And to me, that has been the most memorable lesson of all.

Alice Tickell [AT] – After this week of enquiry, could you reflect on where the mindfulness movement is heading in the future?

JKZ – The simple answer is: I don’t know, but I have a lot of hope. I hope that the people who care about it will deepen their own practice, and recognise how infinite it is. That’s the absolute most important thing. Then, looking at the trends… Mindfulness has spread throughout medicine and schools, and is making an enormous difference. May that work continue. Here in the UK it is also moving into government, and business, at a level that’s nowhere near having happened in the US! So far 145 MPs, and 250 Parliament staff have been through an 8-week mindfulness training programme, and more people want it. There’s no other government in the world that’s dared to go that that far. It’s remarkable, the energy and leadership coming from those driving this deep enquiry on a national level, who see the value of metrics in society that go beyond GDP.

AT – Does it ever worry you that mindfulness is being commercialised and exploited in an attempt to sell it to people?

JKZ – Yes, it worries me a great deal. There are so many different domains in which mindfulness training could be critical, if it’s authentic. If it’s bullsh*t disguised as mindfulness training, it’s still just bullsh*t. [Laughing] Sorry, I can’t help the language – I grew up on the streets of New York…

AT – What do you think can be done to preserve its integrity in the face of all this?

JKZ – You cannot legislate the universe, but you can take responsibility for your own integrity. So if every mindfulness teacher in the world takes responsibility for deepening their own practice, and teaching at the highest possible level – that is the only immunisation against the dissipative forces that are trying to exploit mindfulness because it’s hot. People selling mindful tea, mindful necklaces, mindful hamburgers – I’ve seen all of it! My hope is that soon it’s going to become so yesterday that the exploitative people will be onto the next thing, and leave us people who love the Dharma to continue our work: to do the science, the clinical interventions, the work in corporations and government and everywhere else, with core integrity.

AT – Staying with the theme of exploitation, it seems that many of the problems our society faces are related to a mindset that says “I am an individual separate from the world and others”. Do you think mindfulness could allow for the development of a more interdependent mindset?

JKZ – So, that’s a short answer: Yes. Totally! Let’s make it happen. And we are.

AT – Do you see that as part of the intrinsic value of mindfulness?

JKZ – This is absolutely essential. It is a part of mindfulness. Mindfulness is not a little stress reduction for your own betterment. It is using the opportunity of the human lifetime to contribute to beauty in the world, as well as goodness, wellbeing and health. And creativity, imagination, and love, ultimately. I see them as all the same thing.

AT – These are qualities that are hard to measure, yet scientific evidence was a crucial factor in bringing mindfulness into the mainstream. Why do you think this is?

JKZ – When I started out, the idea that bringing mindfulness into the mainstream of medicine was tantamount to tearing down the citadel of Western civilisation. Think back to a time where if you did yoga, people assumed that you did LSD all the time and lived in a commune [laughs]. It was wrong, but it took a huge cultural shift to bring yoga into mainstream practice. Now everybody does it, and the science has been absolutely essential. So, I knew that if I wanted to bring mindfulness into medicine, I would have to document the outcomes. It is important to point out that the words medicine and meditation have the same root. It’s not tearing down Western science to bring them together. Rather, it’s a reminder to medicine of what it’s really about, which is wholeness. And that wholeness is not something you get: it’s something you realise that you already are.

AT – Do you see any limitations to our reliance on scientific outcomes?

JKZ – It is the ‘skilful means’. You use science to generate interest, to authenticate that certain kinds of changes are happening to people. But science isn’t sophisticated enough to measure all the changes. So no matter what science shows, the story doesn’t end there. It’s much, much deeper, because human beings are much, much deeper. We need to continually update science, or accept that some things can’t be understood by it. At least, not the kind of science that still dominates things. That’s the ongoing adventure!

AT – And you often remind us to keep the long view in mind for mindfulness-based programmes. Can you say a bit more about what you think will support the long view beyond our lifetime, especially in these times of great change in the world?

JKZ – Never forget the 1000 year view. There will always be suffering, and the human mind will always be the human mind. It’s not like if we meditate for 20 years we’ll be in a better place. Rather, what mindfulness helps us to realise is that this is already the perfect place for us to be. That’s a multigenerational view. And it’s why training kids is so important, but in the right way.

AT – And how do we train them in the right way?

JKZ – Well, I’m not sure parents are the right people to teach children to be mindful, because they’re too attached to wanting their kids to be mindful [laughs]. So first, my recommendation to parents is just be mindful yourself. And they’ll learn from you, not your propaganda of how important it is. Second, kids are born with IPhones in their hands, so encourage them to use the mindfulness apps: to use theirs phone to actually be. Encourage presence not distraction.

AT – So you think mobile phones could actually help?

JKZ – You cannot take them away from kids nowadays. So, it’s a good idea to do Aikido with the phone: use its own potential against it for greater good. [Jon is a well-known enthusiast of the martial art Aikido, where one doesn’t attack but renders the attacker harmless by using their own energy.]

AT – Moving on to a more personal note, if you could give your younger self one piece of advice, what would it be?

JKZ – That’s a great question. [Pauses] I think my younger self got it right the first time. I really do. [Pauses for a long time, smiling]. I have no regrets. I feel blessed to be able to say that. It’s not that I haven’t made any mistakes. Life’s all about learning from your mistakes. When I came to meditation at 21 years old, I was very wild. After all, it was the 60s, so sex, drugs, and rock ‘n’ roll were the curriculum – on the side you got a PHD [laughs]. But, seriously, some people never survived that time. Because I came to mindfulness when I was young, I had the intuition that I could cause myself huge amounts of suffering if I fell asleep, and let loneliness and anxiety about the future dominate my life choices. So, in some sense I immunised against self-destruction. But, there’s also a certain indeterminacy: In every single moment we make branch-point decisions, where the life we could have lived if we’d say yes instead of no would go in a totally different direction. And that mushrooms into infinity. So, if I hadn’t got pissed off one afternoon when my experiment was failing in the lab, and said: “Screw this I’m going to lunch!” I would not have met my wife. I would not have my children… I would not be who I am. How can you account for that? You can’t! But you can be accepting of the situation in the present moment and trust how you are in relationship to it. Sometimes it can be very challenging in the face of full catastrophe. But my experience says that it’s doable.

AT – Lastly, you often talk about your love affair with mindfulness, but what are some of your other passions in your life?

JKZ – [Smiles] My children, grandchildren, wife, swimming in the ocean…  [Pauses] Music, art, writing, poetry. I mean… I love the sky! The list is endless. There’s a lot of gratitude. I love this hotel – it’s totally mind-blowing to be having a conversation in this beautiful space, constructed by people who are all dead. And of course, it’s the same with the meditation: it’s an inheritance, a lineage. And our job – if we want it – is to carry it on, to bring it into the modern era, into what’s called for in this day and age and for the next thousand years going forward. And if we come to it with that kind of intention, it’s going to be beautiful.

Alice Tickell is Research Assistant and Project Co-ordinator at the Oxford Mindfulness Centre.

Jon recently led one of our Masterclasses (pictured below).

You can take part in an exploration of mindfulness and learn from mindfulness experts Chris Cullen, Melanie Fennell, Willem Kuyken and Mark Williams, at our Summer School in Oxford this August.