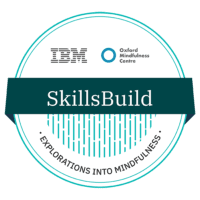 A new partnership has created an introductory mindfulness course for young people and unemployed adults as part of a vast skills training program to support “new collar” work in the 21st Century technology industry. The next phase of the partnership will focus on providing access to live online mindfulness courses for all IBM staff around the world.

A new online introductory mindfulness course, developed in partnership by tech giant IBM and the University of Oxford Mindfulness Centre (OMC), is now being offered to secondary school pupils, educators and adults seeking to re-enter the workforce. The course has been launched as part of IBM’s vast training program to help young people and unemployed adults develop skills that will enable them to thrive in the digital economy. It also completes the first phase of a long-term partnership that will see introductory mindfulness training being offered to all IBM staff over the next three to four years.

The P-Tech School Model is a public education reform initiative created by IBM, focused on college attainment and career readiness. It aims to prepare young people with the academic, technical and professional skills required for 21st Century jobs and ongoing education. Such jobs include those with technical skills such as cybersecurity, artificial intelligence, quantum computing, as well as “softer” skills such as communication, leadership, teamwork and collaboration. P-TECH serves students from primarily deprived backgrounds, with no testing or grade requirements. The scheme represents one of the largest initiatives in IBM’s Corporate Social Responsibility (CSR) portfolio, and the P-TECH network currently includes over 200 schools across 24 countries.

The online, self-directed format of the course will allow up to 250,000 P-TECH pupils as well as marginalised and unemployed adults access to teachings on the basics of mindfulness, its underlying theory and research, and a number of practical exercises to begin cultivating skills such as improved attentional focus, and greater emotional and behavioural regulation.

According to a continually expanding body of research in psychological science and neuroscience, mindfulness has been shown to reduce stress and promote greater well-being and resilience. In a working world characterised by volatility, uncertainty, complexity and ambiguity (encapsulated in the managerial acronym ‘VUCA’), P-Tech and Skills Build were set up to equip future workers with the skills required to succeed in a fast changing, and increasingly technological world.

The Case for Mindfulness

One of the skills that is likely to remain as relevant in the future as it is now, is self-regulation (the ability to effectively modulate one’s emotions and behaviour, to allow the pursuit of long-term goals) in the face of challenges, change and uncertainty. Tang et al. (2015) propose that the mechanism through which mindfulness exerts its effects is a process of enhanced self-regulation, including attention control, emotional regulation and self-awareness.

There is a growing body of research that proposes that self-regulation can have lasting effects on people’s lives. The Dunedin Study in New Zealand has revealed some intriguing findings about the long-term effects that self-regulation and self-control can have on a person’s level of success in life. In this on-going project, researchers have been following a cohort of 1,000 people since birth (they are currently in their 40s). The research team has been gathering data on a whole range of outcomes, discovering that self-control measured in childhood and adolescence is associated with wealth, health, substance misuse and criminality in adulthood. In other words, they have found that people with greater self-control in childhood have gone on to have better outcomes in many different aspects of their lives. Importantly, researchers in this study have shown that self-control could vary over time. Indeed, when children with low levels of self-control acquired greater self-control in adolescence, their outcomes in adulthood improved accordingly.

Attention and awareness play a key role in self-regulation and self-control. A system can only regulate itself if it contains sensors. As such, being aware of your own thoughts, feelings, bodily sensations and impulses (a core part of mindfulness training) is the foundation of self-control and self-regulation: without it, there is no ability to choose an appropriate response.

The ‘Explorations into Mindfulness’ course 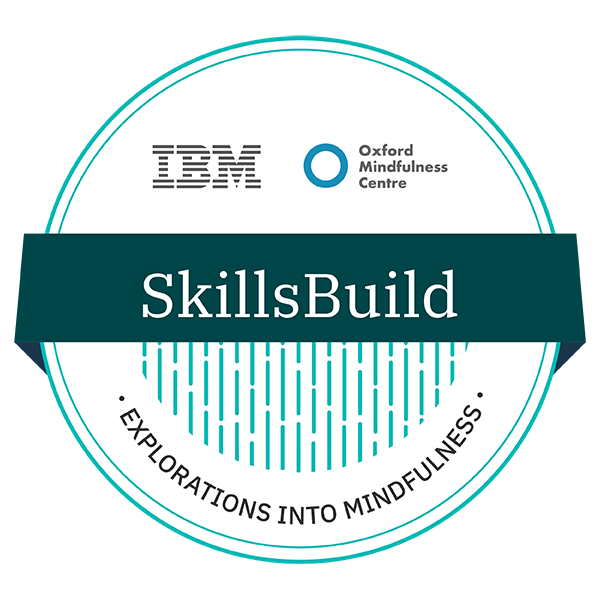 ‘Explorations into Mindfulness’ is designed as a basic introduction and is made up of nine modules and a brief assessment. Throughout the course, reading materials, reflection moments, videos and short stories are offered. The course ends with additional resources to support an on-going personal and professional mindfulness journey. Upon completion of the course, learners earn a “badge” or digital credential, which they can then share on their online resumes alongside other achievements.

IBM/OMC “badge” or digital credential, which learners can share on their online resumes

Paul Ellis has worked for IBM for 12 years, and helps out as a volunteer with a few P-TECH schools in Dublin, Ireland, where he is based. Paul completed the online course out of interest, as soon as he heard about it:“What I loved about this online course was that it was properly bite size”, he explained. “It was so consumable and accessible. I’ve even been doing the “Bee” mindful minute with my 6-year-old son, because he can hear it and feel it. He sees my wife and I practise meditation, and he has done some practices at school. So it’s a really great way to practise just for one minute with the rest of the family.”

‘Explorations into Mindfulness’ is currently in English however it is now set to be translated into additional languages, which will expand its global reach through the Skills Build platform.

IBM and the University of Oxford Mindfulness Centre are now entering the second phase of their partnership, which will see introductory mindfulness courses delivered live online to IBM staff across the world, alongside a teacher training pathway for interested staff to become qualified to facilitate mindfulness programs in-house on a sustainable basis.

Acknowledgment – many thanks to Paul Ellis for agreeing to share his experience.

Author note – Oli Bazin is a mindfulness instructor and Teaching Partner at the University of Oxford Mindfulness Centre, with a special interest in the provision of mindfulness training in Higher Education, healthcare and other workplace settings. Oli graduated from the Masters in Mindfulness-Based Cognitive Therapy (MBCT) at the University of Oxford in 2016. He previously worked in NHS research, primarily in communications and public engagement. He now runs mindfulness courses and workshops for university students, the general public, as well as professionals in healthcare and other workplace settings. He is based in Bristol, UK.